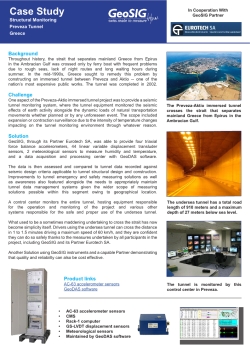 Throughout history, the strait that separates mainland Greece from Epirus in the Ambracian Gulf was crossed only by ferry boat with frequent problems due to rough seas, lack of night routes and long waiting hours during summer. In the mid-1990s, Greece sought to remedy this problem by constructing an immersed tunnel between Preveza and Aktio -- one of the nation’s most expensive public works. The tunnel was completed in 2002.

One aspect of the Preveza-Aktio immersed tunnel project was to provide a seismic tunnel monitoring system, where the tunnel equipment monitored the seismic effects of earth activity alongside the dynamic loads of natural transportation movements whether planned or by any unforeseen event. The scope included expansion or contraction surveillance due to the intensity of temperature changes impacting on the tunnel monitoring environment through whatever reason.

GeoSIG, through its Partner Eurotech SA, was able to provide four triaxial force balance accelerometers, 44 linear variable displacement transluder sensors, 2 meteorological sensors to measure humidity and temperature, and a data acquisition and processing center with GeoDAS software. The data is then assessed and compared to tunnel data recorded against seismic design criteria applicable to tunnel structural design and construction.

Improvements to tunnel emergency and safety measuring solutions as well as awareness also featured alongside the needs to appropriately maintain tunnel data management systems given the wider scope of measuring solutions possible within this segment owing to geographical location. A control center monitors the entire tunnel, hosting equipment responsible for the operation and monitoring of the project and various other systems responsible for the safe and proper use of the undersea tunnel.

What used to be a sometimes maddening undertaking to cross the strait has now become simplicity itself. Drivers using the undersea tunnel can cross the distance in 1 to 1.5 minutes driving a maximum speed of 60 km/h, and they are confident they can do so safely thanks to the measures undertaken by all participants in the project, including GeoSIG and its Partner Eurotech SA.

Another Solution using GeoSIG instruments and a capable Partner demonstrating that quality and reliabiilty can also be cost effective.